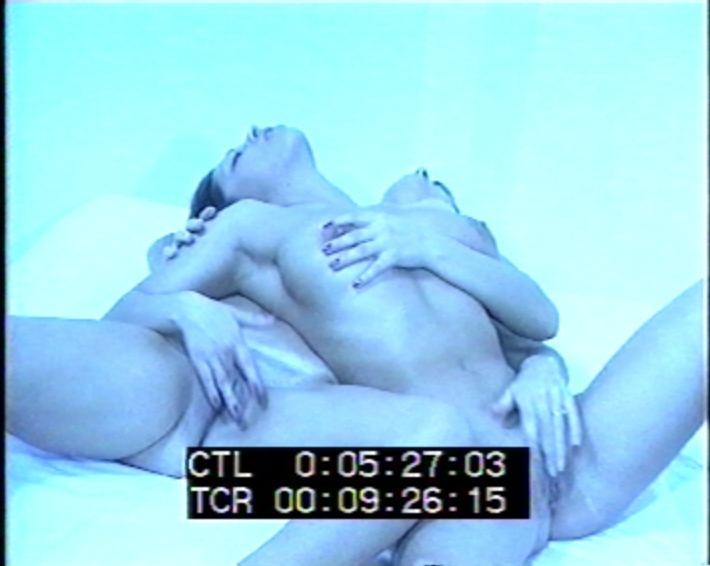 “In a white setting, lacking any decorations, whispers, or clothes, various scenes of a sexual nature are filmed. The actors are asked to behave as if this was their first time with the person lying beside them. The voices of the actors overlap and are heard as a multiple voice-over. There is nothing more pornographic than knowing what an actor is thinking as he performs.”

After having worked on the setting (Retratos) and the limits of intimate sexuality and its taboos (Senxia I and II) it seems natural for Jana Leo to next work in the audiovisual genre which has been most misrepresented. For La mano libre Leo presents us with an aseptic setting, somewhere between art’s white cube and a dissection room, a space belonging to the world of x-rated film scenes. In this piece, the artist no longer deals with just her own self and the people closest to her. She has expanded the dimensions of her work, this being a piece made to order for a film production company with real actors. Leo meticulously deconstructs her own aesthetics; under a persistent blue filter she introduces paradoxical situations, treating the video as if it was the soundtrack of the overlapping thoughts being voiced by the actors, the resulting effect being that of a subtle confusion. By expanding the limits of her own personal aesthetics, Leo manages to quite literally develop a study on the mis-en-scene and the images of sex, a dynamic that, in this case, takes place between two women, a woman and two men, and between two men. In all cases, the artist attempts to provoke not only desire in the spectator, but also critical reflection.

The first sequence in La mano libre deals with sex between two women. One of them is thinking of how she should get started. Meanwhile, she actually starts, although somewhat artificially. Overlapped, we hear her partner’s thoughts, who is thinking about the possibility of having an orgasm in public spaces, and about what it means to construct a private space for oneself amidst a community of people. As a concluding thought she adventures that sex is just sex, something like a massage. In the second section of the video, what starts as a heterosexual couple, ends up becoming a trio. The first man meditates on his lack of excitement and the fact that this miserable situation is in itself a psychological obstacle preventing any form of excitation. The woman is thinking about sensitive spots, comparing them with everyday acts. The other man thinks of following orders. When he is told to get an erection, he does so with the help of metaphors. In the third section of the video the main characters are a homosexual couple. One of them is worrying about the difficulties of establishing a sexual relation between same sex individuals, while the other is realising that if he doesn’t see desire in the other, his actions are nothing but compassion. A loop of frustrations makes both of them loose their erection. They finish, not having reached orgasm, looking at the floor and blaming each other, both claiming that it is the other’s insecurities that which has spoiled it for both. One is left, the insecure one, and he ends up masturbating alone.

This piece is part of a project curated by Fernando Castro Flórez for the porn production company X Canal. He asked four contemporary artists (Bernadí Roig, Domingo Sánchez Blanco, Enrique Marty and Jana Leo) to produce each a piece of video art on the subject of pornography. Under the title of the project “Por(no)pulsión”, Porndrive/For(no)drive [T.N.], the four artists thought about, looked at and acted on the turbulences of sex through an exterritorial practice, trying to provoke both desire and critical reflection on the viewer. The four videos were included in a pack that was presented to the public at the Círculo de Bellas Artes in Madrid in July 2002.