A multidisciplinary and self-taught artist aiming, with his audiovisual pieces, at syncretism. A pharmacist by trade, he worked as such in San Mateo de Gállego between 1991 and 2002, at which point he decided to work exclusively on his creative production.

In 1984 he starts working in experimental cinema and founds in 1986 his own film production company, which he sets up legally in 1997.

In a basic course at the New York Film Academy in 1994 he makes four films, one of which, “The Mutant” receives a prize at the 6ª Semana de Cine Experimental de Madrid in 1996. Another one of those films, “The Flame” was selected and screened at the Experimente section of the Dresden Film Festival in 2005.

To finance his films Calvo has worked doing telecine and editing of Super-8 archives for private clients, a job that has provided him with skills in the use of computer editing tools.

Presently he works on the exploration of the limit between the static image and the still image in his project “Multiframe”, and has started composing his own sound tracks, bringing together experimental cinema techniques like manipulating the celluloid and painting directly on it, and digital audiovisual editing, aiming to create his own collections of film on DVD. 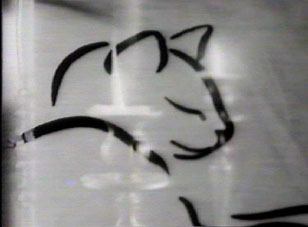