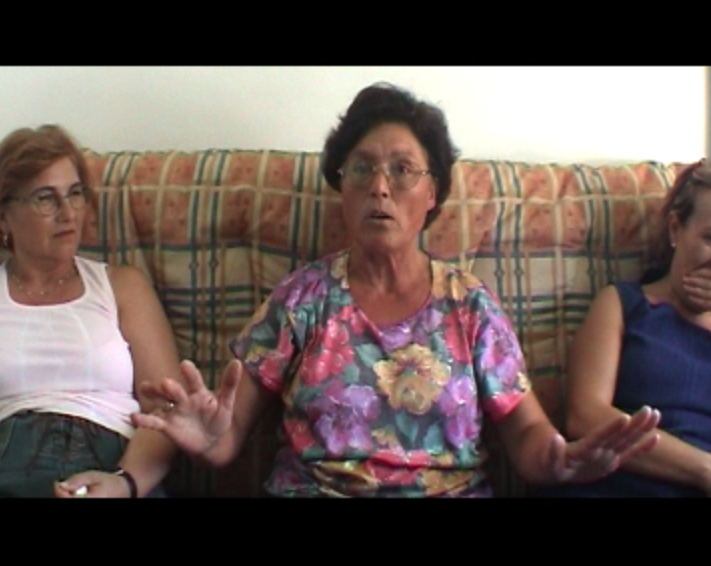 In this piece Ortuño approaches the reality of a small village called Blanca (white) in the Murcia region. The video begins with shots of the village streets at night accompanied by the sound of the church bells. This is no doubt an idyllic image that we associate with the tranquility and peace that we presume reign in these small towns, disseminated along the whole of the Spanish geography, and where outmoded habits of coexistence and labour survive.

After a first scene in which the village is introduced, the camera shows us a group of women working in a rug manufacturing plant. The first shots are short and show us the gestures and hands of the women weaving the rugs. As the shots get wider we get to see the whole space of the plant, with the tables, and more women, all in silence and of a similar age, weaving and performing identical gestures. The work is mechanical and solitary, each one of the women weaves her own rug. There’s no singing, no rituals, just routine.

Ortuño places the camera face to face with its subjects and lets the three characters speak freely about their work whilst sitting on a sofa. Two of them work in the rug manufacturing plant, and the third works at a fruit packing plant. The three of them, and one in particular, tell us anecdotes, from the present and from the past, about their work in the plant, about how they are treated by their bosses, about the labour injustices they have suffered, and about the despotism that prevails in the village. These are not great stories, but rather snippets through which the impotence, rage and desires and ambitions for the next generation are expressed.

Along the video are intercut at different moments shots showing some of the village’s street signs, such as the “Plaza 18 de Julio” or the “Calle del Generalísimo Franco”. The end of the piece replicates the beginning in that we again hear the bells chiming.