After completing her studies at the College of Fine Arts in Cuenca, Campanilla, originally from Madrid, has combined her work as an artist with the programme direction of the video festival 143 delicias, which she co-directs with Iván Pérez, also an artist. 143 delicias is well-known for showing short, irreverent and fresh video pieces. Campanilla’s work was initially first shown in video festivals, and very quickly it was included in different video art screenings, programmes and exhibitions. The whole of the artist’s oeuvre is characterised by its immediacy, its economy of means, little editing and a great deal of spontaneity. Most of her pieces take place in domestic or family settings, and feature everyday objects and the collaboration of her friends and family. Campanilla’s work has been screened in a great number of cultural and art institutions, as well as, occasionally on various television programmes, such as Metrópolis. 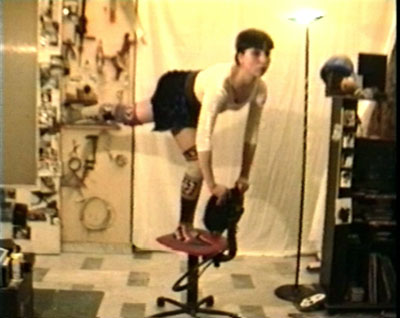