This is a project of co-research between different women who had, either already started a trajectory of research and practice around the transformations in the work space as part of a group (trabajo zero, sexo mentiras y precariedad) or individually, or wanted to start this line of enquiry. The interests of all these women converge  on 20J, 2002, the day of the General Strike, organised by the major unions.

Escalera Karakola was conscious of the fact that the production process of a new, totally transformed, work context, whose dominating tendency is the valorization of immaterial labour (affective, communicative, creative labour, work related to the decodification of signs, to the manipulation of codes), is not interrupted by a strike of this kind. The precarization of the labour market had expanded to such a degree that most female workers are not even affected by the new reforms against which the strike had been called (reforms that are intended to further reduce labour rights and protection). We tried to think of a new way of being on strike, a way that would help us communicate with the new realities of the labour market. We then decided to transform the classic picket line into a picket-line-poll (we couldn’t face the idea of berating a precarious worker, with an hourly contract working in a supermarket, or that of closing a small corner shop owned by an immigrant, because, at the end of the day, despite all the good reasons to stop work and protest, who had been called on to strike? who had been thought about? was there even a small interest in the unions for the reality of precarious workers, of immigrants, of housewifes? Did unemployment stop the production process of domestic workers, of translators, designers, programmers, of all of those freelance workers who in stopping their working routine that day, all they were doing was doubling their workload for the following day? We thought it more productive to attempt to ask those women who were working (or consumming) that day, and those just walking by. This small and discrete sketch for a co-research project was the starting point for the driftings (derivas). 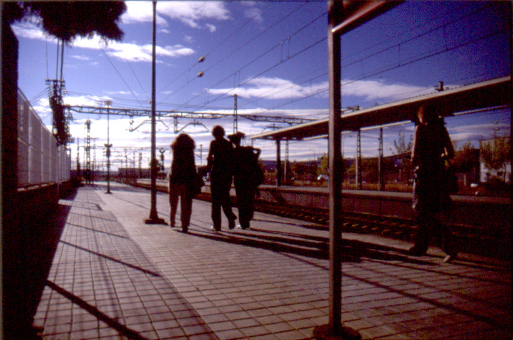 ...Above all, we were impelled by the desire to get to know along the way, to communicate, to find out about all those new situations and realities of the precarious labour market and of the life put to work from one’s own experience: telling each of us to the others. The mapping out of the cartography of women’s precarious work took place through communication, thinking together and registering all of this in order to approach a production of knowledges that would yield the highest level of materialization (photos, video, recordings, written statements). The aim was to accummulate the material necessary to further expand the communication of our experience.