Women's struggle in the precarious Barcelona

After viewing the HAMACA archive, we have selected some works that give an insight into the relationship between increased female representation in the workplace and job insecurity, which are rooted in the labour model of Spanish capitalism that took shape in the 1980s and 1990s.

The profound transformation of labour that took place as a result of the new forms of capitalist exploitation has not only had an impact on the daily life and social makeup of the working class—particularly women—but also on the entire framework of social, political and cultural relationships, creating deep and permanent contrasts in Europe’s largest cities.

One such model is Barcelona, which, just like Madrid, Murcia or any other tourist city in Spain, appears to be split in two. The first is the cosmopolitan part, which dazzles and offers culture, leisure, picturesque neighbourhoods to visit, museums, theatres, music, sea and mountains. The other is that of working class women, who ensure that all parts of this tourism machine continue to run smoothly. It is these women who are paid the least for their jobs, which are considered as “the bottom category” of positions. Barcelona is not split in two. It is just another European city which is governed by the laws of capitalism and the large tourism, construction and hotel companies, which require this army of women who are invisible to the eyes of tourists, who are too busy taking photos of Gaudí’s architecture or La Boqueria market.

No legal or life equality for women in precarious situations

According to the Equal Opportunities Strategic Plan (Plan Estratégico de Igualdad de Oportunidades, PEIO), the Government of the Kingdom of Spain has a “commitment to the effective equality of women and men”, and the plan states that “the right to equal treatment and non-discrimination and the principle of equal opportunities between women and men is embodied in our Constitution, in articles 14 and 9.2, and is essential for building a fair, united and free, socially and economically developed society, laying down the consideration of equality as a superior value of our legal system”. However, statistics show that this “equality” in the eyes of the law does not equate to equality in terms of life for the majority of women—the workers, the poor, the young—whether from Spain or further afield.

Female precariousness. It’s difficult to go out onto the streets, to strike or collectivise the feeling of exploitation and oppression when the working class is so fragmented and divided. It is also difficult to feel part of something greater when you can’t even get to know the hotel chamber maid that cleans the room next door. This is because she only has 15 minutes to leave it spotless, and she doesn’t have time to eat if she wants to do what should be considered as normal or a “right”: leave at the established time, because overtime is not paid.

Her body aches from cleaning so much, as if it were an assembly line in which the machines were the hands and backs of workers. But there is no “right” for these bodily pains to be recognised as occupational diseases or injuries, because they may derive from “events outside of the workplace”. So there is no alternative but to live by taking twenty painkillers a day. This means that there are no basic rights or constitutional article regarding legal equality that explains why there is no life equality.

From the home to the workplace? The fight against precariousness is also a fight to “not go home”. The increased female presence in the workplace is, among other things, the result of decades of struggle by women to make a place for themselves in the job market. As women left the home to go to work, this brought into question the model of femininity that prevailed in the late 19th and early 20th centuries, known as the “domestic angel” or the “perfect wife”. Currently, this domestic role continues to permeate the feminisation of precarious work, albeit in other ways.

Explicitly or not, female workers in precarious situations, such as immigrants and young people, are challenging the labour model of Spanish capitalism that took shape in the 1990s. That which Las Kellys, the self-organised hotel chamber maids, suffer from and refer to as “externalisations”; a process which worsens working conditions, creates job insecurity and jeopardises the lives of millions of people.

Female precariousness. It is not an individual issue, but a collective one. With the new structuring of the capitalist labour market, there were “post” theories that the old and traditional types of struggle had died away, along with all ideologies besides capitalism. The only remaining options are the individual and cultural struggle, they said.

But capitalism has gone back to its “old and traditional” ways using other forms of exploitation, such as the subtraction of capital gains and patriarchal oppression. And working class women are showing that they can rupture the fragmentation and individualism by organising themselves to fight collective battles, side-by-side with the rest of the working class. Together with other social collectives. Strikes, resistance fund raising, support commissions, going back to “old and traditional” ways because they have to fight as their great grandmothers did for the principle of “same work, same pay”, and in some cases just so that they are allowed to work.

This exhibition aims to reflect these experiences. Because the battlefield of gender inequality is also a battlefield of classes; from there we aim to recover and reclaim the lost rights, winning this battle on behalf of all women.

Programa (organized by the order of projection) 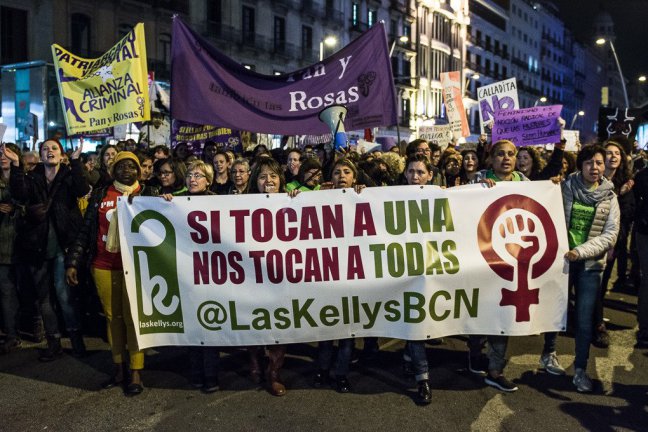