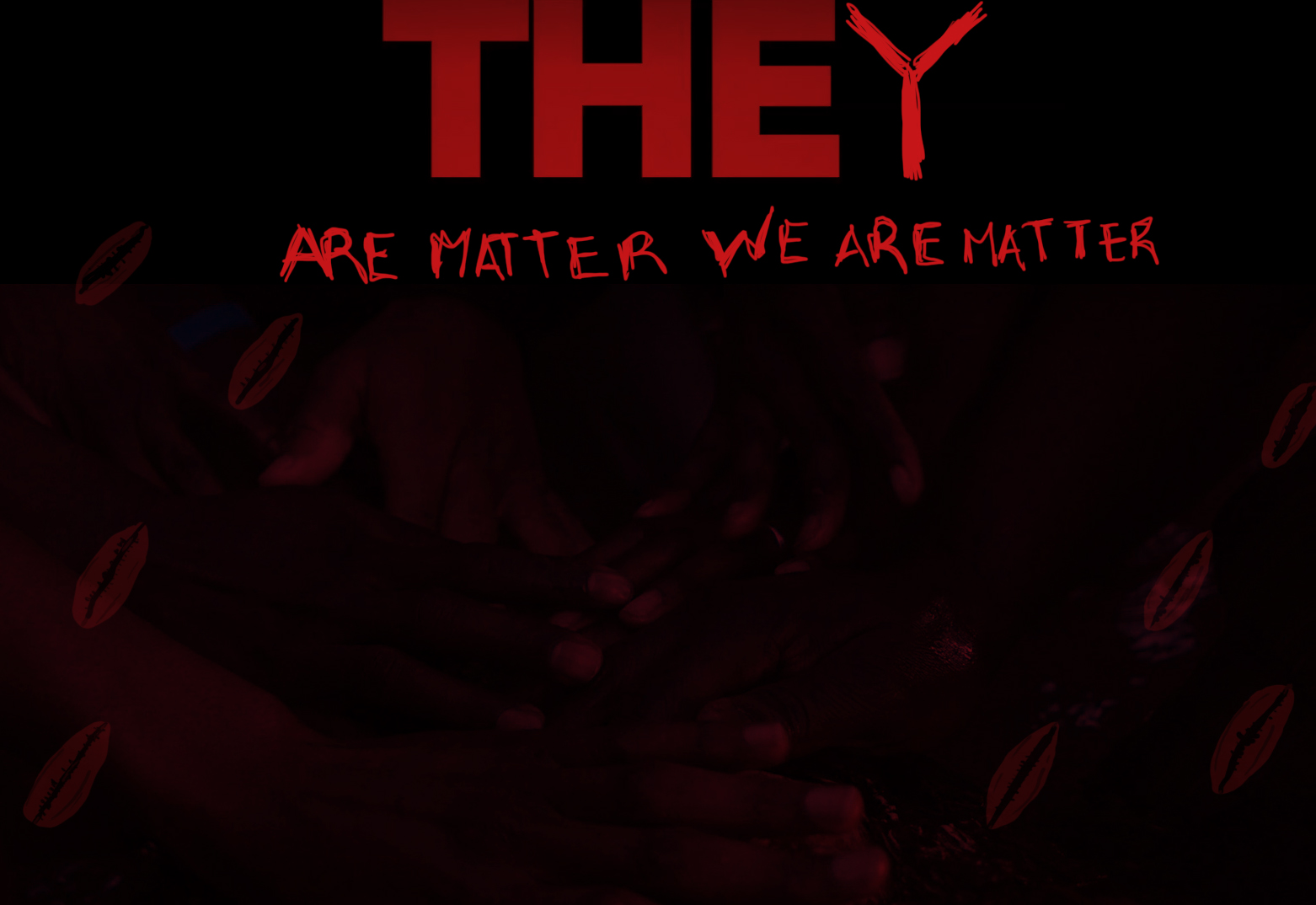 We are black bodies, cimarron bodies, no straight bodies living in the wake. We live in a dimension that does not separate the present, the past, or the future. It is the time of the simultaneity of times. Black time: nanotemporal unit of escapability. Anti-chrononormative, anti, sequential, non-calculable temporal unit. In this time we inhabit the wake, in the wake (Christina Sharpe).
the wake an insistence on existing:

To be in the wake is to occupy that grammar, of the temporal infinitive: since the beginning of plantation, but the plantation never ending. Frank Wilderson, in relation to the wake, makes reference to the fact that to live as black maroon bodies in the wake, is "to remain in the [ing] in the hold of the ship". A black vessel called the Plantation Nation-State.

That ing continuum ing, in which we find ourselves in the diaspora, is a back and forth, it is the reactivation of trauma and the activation of healing at the same time. This spiraling movement is a temporal dimension (Black time) that emerges in our day of social death. This is not to say that we are dead or that death is the end of life for Black and diasporic bodies.

That is the dimension of non-being that we inhabit, Fanon would say, on the line below the fiction of humanity, is existence in the dimension of matter. When we shout "black lives matter" we are not only saying that black and diasporic lives matter, we are marking our place in the world, in a nanopolitical, quantum and ancestral dimension of power and existence. It is a place of existence in non-existence. As my friend Jota Mombaça would say, it is the black (in)existentialism of the bodies of the diaspora.

The body that writes this text is a fugitive body, a maroon body in flight from the cis-heterosexual regime. On the run from gender categories as part of the prison system constructed by white supremacy. I am a matter body (black/brown/matter), living in the wake; a migrant body, with the wounds of the maafa on my skin, with the memory of the pain of police persecution, the confinement of family members in prison and the transformation into matter of other black and Afro-indigenous bodies in one of the orbits of the wake next to me. Even these bodies are traveling in time. Even these bodies are still matters of an indwelling time. I situate myself in this way to make it clear that I am writing from the skin and not from abstraction, and at the same time I am writing from the wake. It is there that I was enveloped by the grammars and narratives of Sally Fenaux Barleycorn, Heidi Ramirez, and Linda Porn, who live in the wake as I do.

We are matter, and a black body in the sea never disappears. This sentence did not disappear from my mind as I watched Unburied by Sally Fenaux Barleycorn. I kept thinking about the «indwelling time» that Christina Sharpe talks about. Let's think then about how long it takes for a substance to decompose, to integrate with other substances like iodine in blood, iodine in sea salt, salt, sand, and blood.

We are black matter. Jannia Gonzalez, an Afro-Caribbean friend, told me that the salinity of the blood has been recycling... It has a «indwelling time» of thousands of years. The salt of those black bodies thrown into the sea or the fugitive black bodies in the sea is still being recycled... That is resident time. 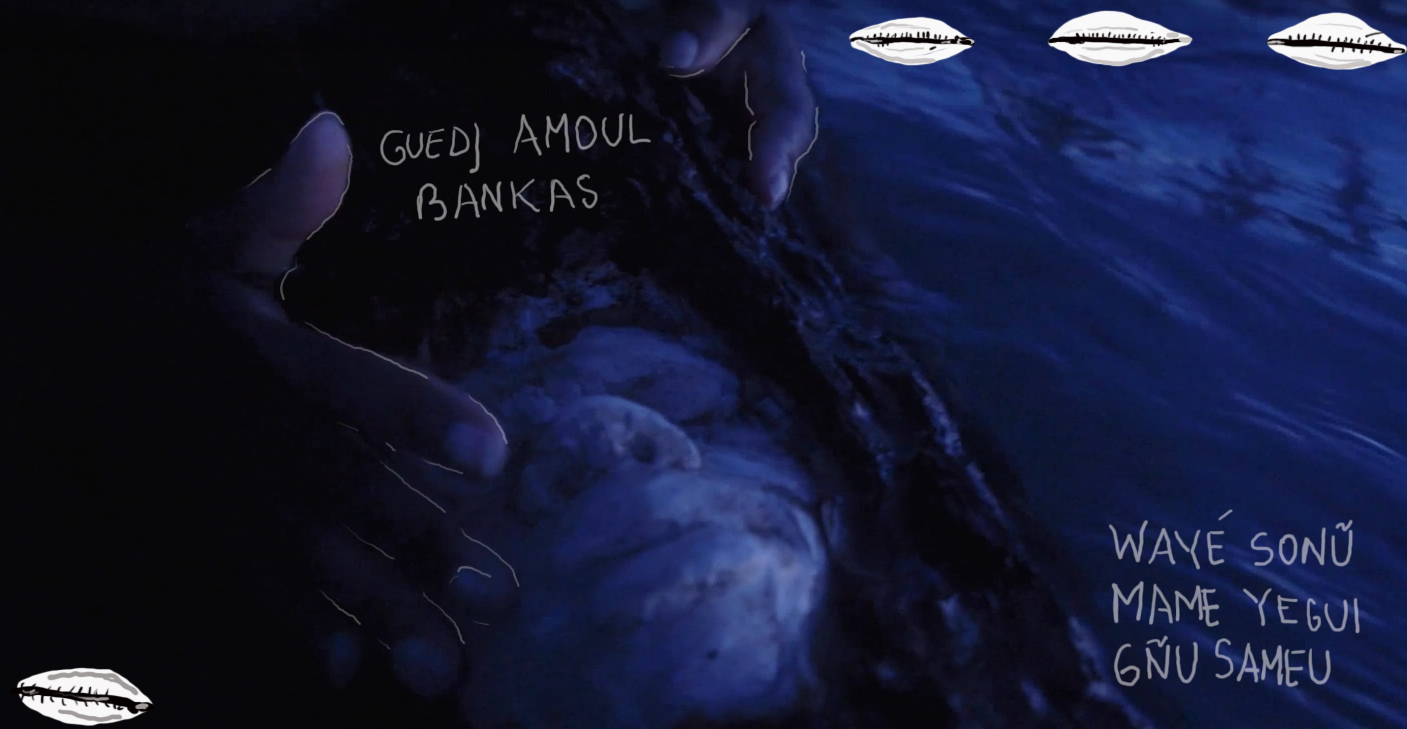 Unburied, a work by Sally Fenaux, shows the relationship between sea-matter-black memory-pain-healing. It shows all the black cuerpxs who live in the wake and who, present or not, persist in the indwelling time, in the sea, its history and its infinite time. 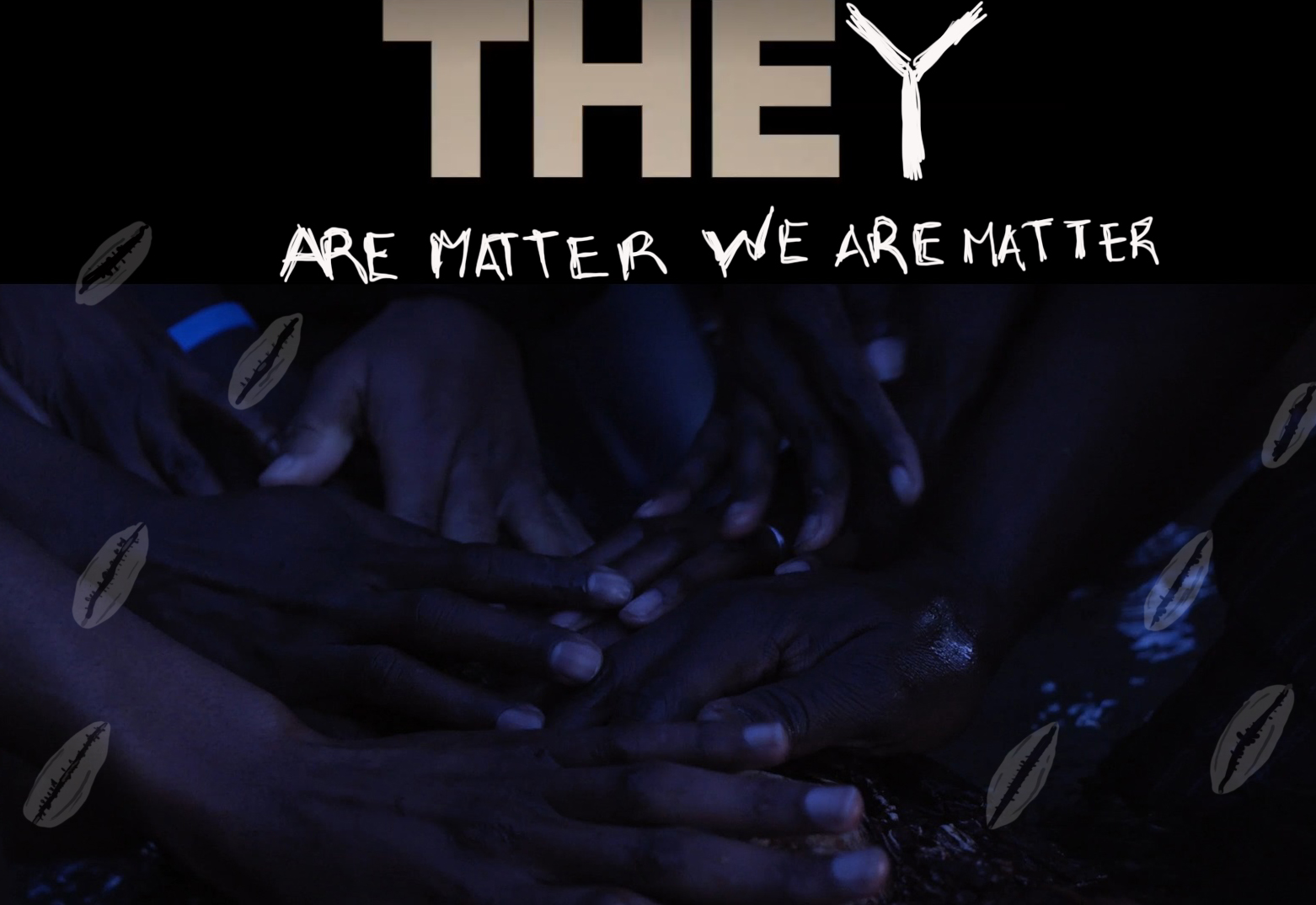 We are sea matter. Vanessa Agard Jones, Afro-Caribbean, tells us about what sand remembers. She relates that almost everywhere on earth sand is composed primarily of one element: in some places silica, in others limestone. Ninety percent of a grain is almost always only one of these two elements. Our bodies are sand and they are matter. Our libidinal energy is in the actions we do in the neoplantations of the 21st century. All food sown worked by a black body is full of black energy. Energy of exploitation, vital energy. Silencio, Heidi Ramirez's work, resonates beyond the voice and beyond the absence of sound, it resonates beyond the body: it resonates in matter, that biopolitical unit that makes up the black body. 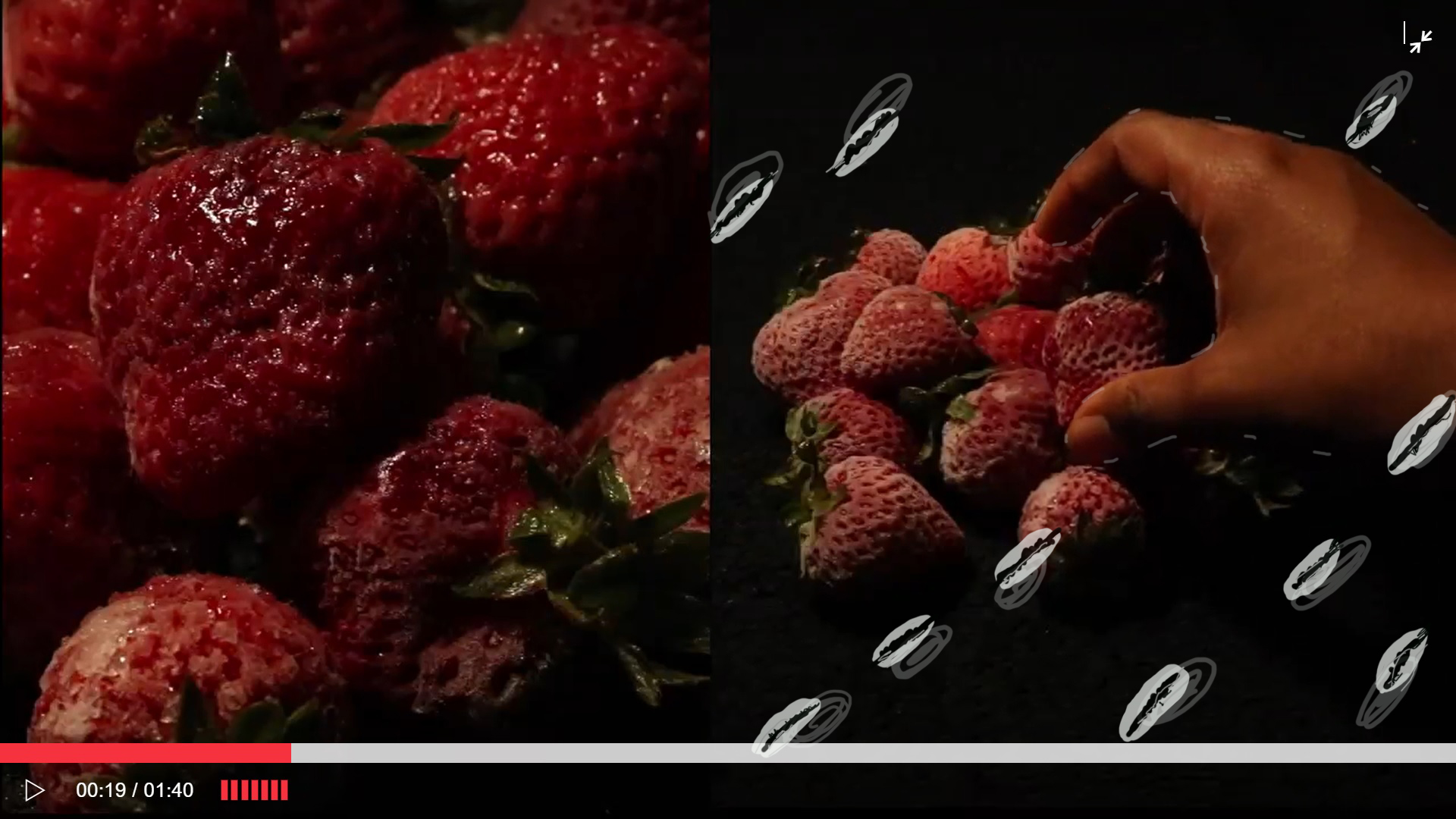 Heidi shows matter-bodies and objectified bodies, bodies that matter and bodies that do not matter. Bodies consumed, bodies not recorded and recorded from white supremacy, in an archive of living pain. World Press Photo 2019, black bodies that transform, that does not die, and that vow to destroy like our ancestors all that whiteness possesses1. 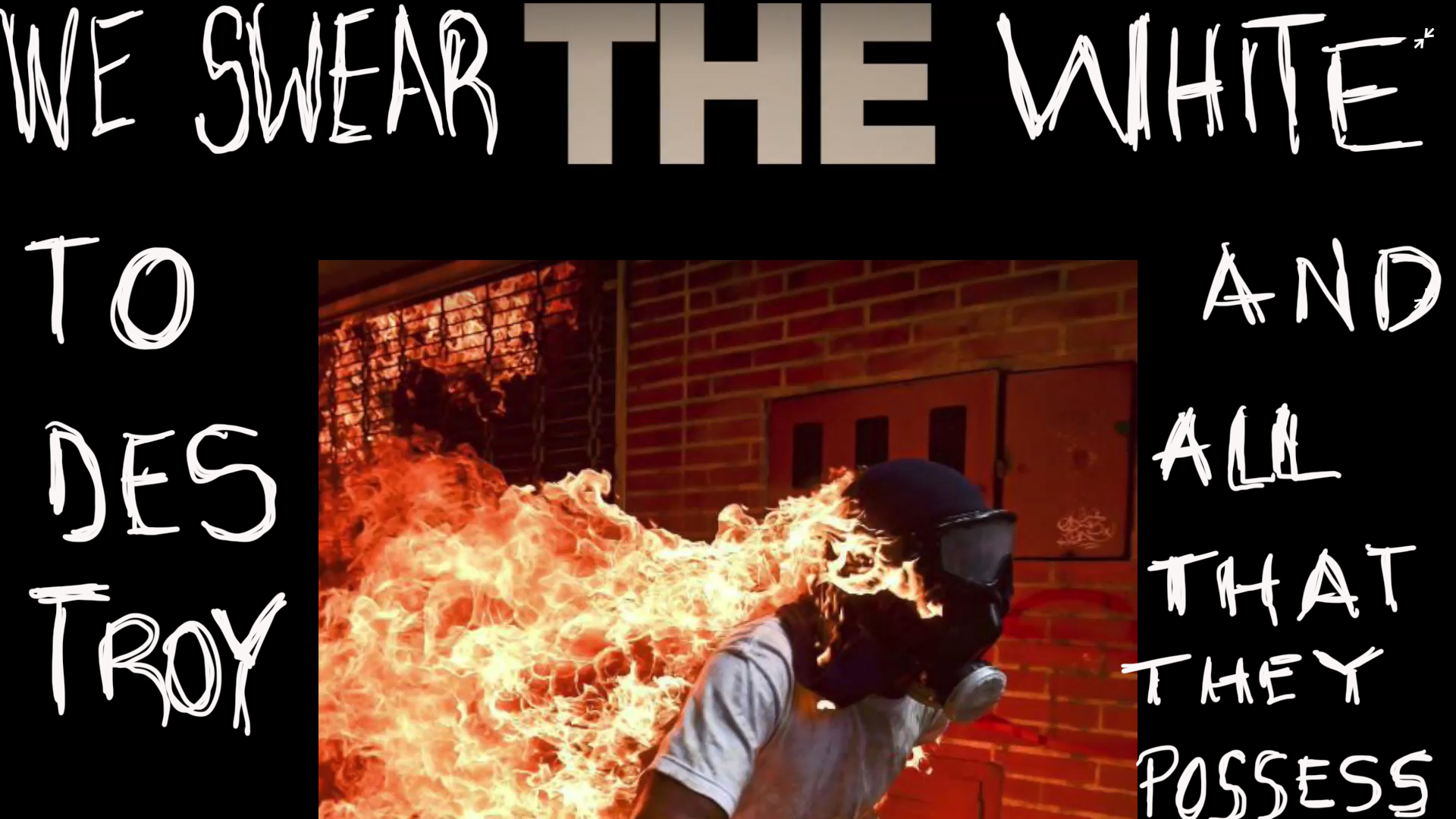 In Venus in two acts, Saidiya Hartman tells us that perhaps our only form of self-repair in the face of colonial damage is to rewrite our own history. What happens in our imaginations when the narratives that run through us have bleeding bodies, open wounds that have not healed?

Europe must die. That is the future of this territory. And we, blacks and bodies of the diaspora, maroons, are going to live. We are matter, matter that persists and resides in time. Sally Fenaux Barleycorn, since 2015 or maybe earlier, is thinking about this future of social distancing and protection, we can see it in Skinhearts. The future is in a journey to the past.

In 1804, during the Haitian Revolution, a black territory was decreed, disputing its existence with the French whites who invaded and massacred villages in the Caribbean. The Haitian Revolution shouted: "When will we get tired of breathing the same air as the whites". Today we are in a dispute for the air. This is Black time. 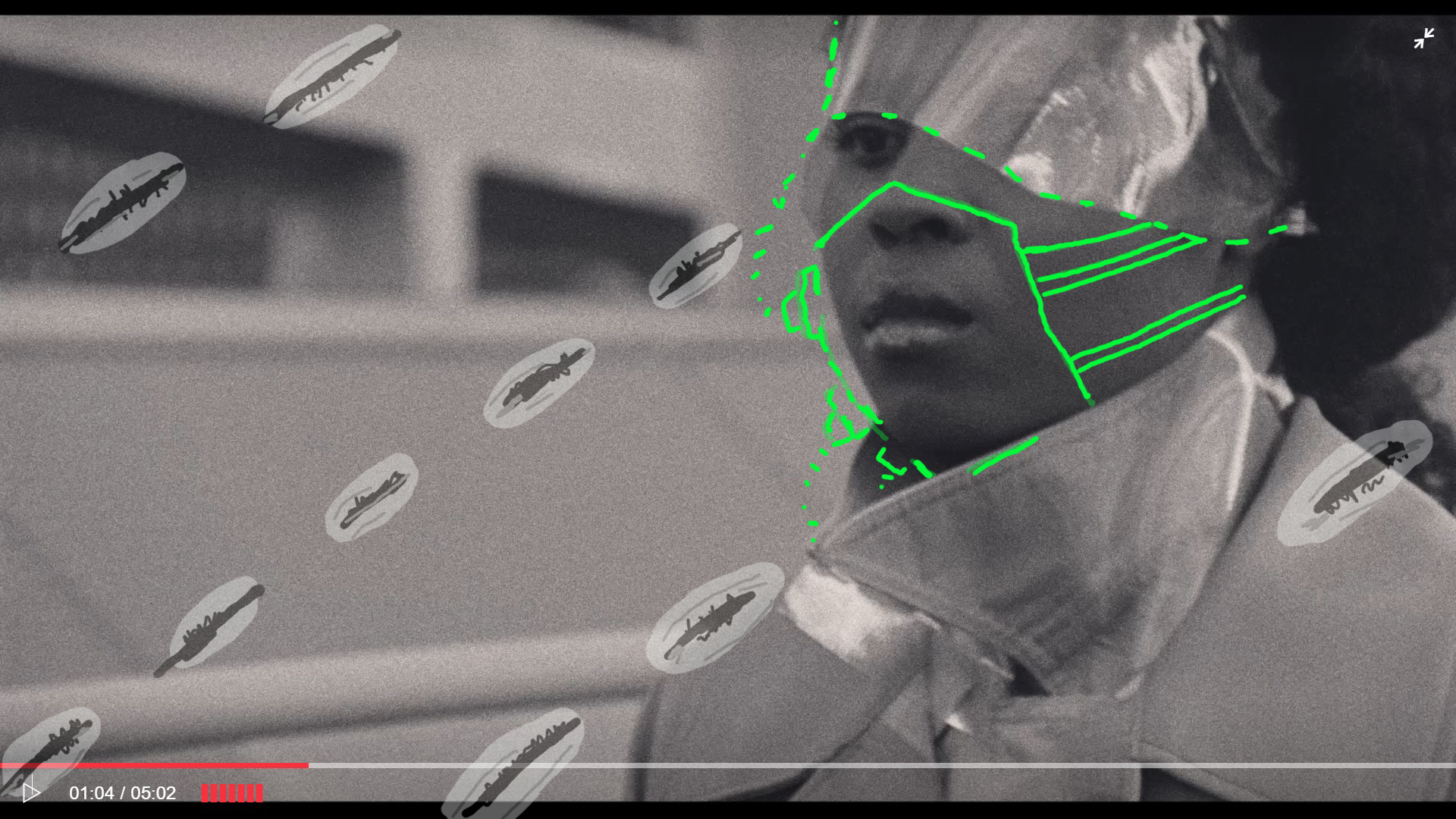 1 ‘We swear to destroy all that they possess’. C.L.R James: The Black Jacobins. Toussaint L'Ouverture and The Santo Domingo. Revolution.

iki yos piña narváez funes o Parchita Caribean, artist. Her gender is Guaichía. Anti-racist activist, performer and queer artist. She is part of the research and political-artistic activism collective Ayllu, from where she has participated in the design of the Program oriented to subaltern practices (P.O.P.S.), which has been part of Matadero Estudios Críticos, at the Centro de Creación Contemporánea Matadero Madrid. She has been a participant in the exhibitions Devuélvannos el oro (Matadero Madrid, 2018) and Todos los tonos de la rabia (MUSAC, León, 2018-2019). She has been part of different collective publications that incorporate discourses in relation to whiteness, colonialism and sexual and gender dissidences through texts such as 'No soy queer soy negrx' in the book No existe sexo si racialización (2017), 'Este cuerpx otrx' as part of Inflexión marica. Escrituras del descalabro gay en América Latina (2018), or No son 50, son 500 años de resistencia. 10 years of Migrantes Transgresorxs (2019). His work and that of the Ayllu collective are part of the collection of the Museo Nacional Centro de Arte Reina Sofía (Spain). As part of the collective Ayllu, she has been part of the selection of artists for the Biennale of Sydney 2020. Together with Jota Mombaça, he was awarded the Pernod Ricard 2020 Grant. He has been invited with the Ayllu collective to the Kochi Biennale 2022.